The Circumcision of Saint Simon Trent

Circumcision by David Gollaher, 2000, Excerpts
Circumcision was a leitmotif in the stories of Christian boys martyred by Jewish fiends who, in the case of Anderl von Rinn [1462], collected the child’s blood in a bowl and used it to make Passover matzohs. The archetypal expression of the atrocity appeared in the late fifteenth-century woodcut illustrating the murder of Saint Simon of Trent [1475]. The prototypal image of Saint Simon’s martyrdom, published in Hartmann Schedel’s Nuremberg Chronicle, portrays Jews circumcising the two-year-old while they bleed him to death, purportedly saving his blood for use in their Passover ritual.

Claudine Fabre-Vassas, a French ethnologist, describes the engraving that depicts the martyrdom: “The emphasis is placed on the treatment of St. Simon’s genitals, which are being cut with a large knife. A gaping wound is opened at his throat, from which the blood is flowing into a receptacle. Shearing scissors are ready to cut into this chest and needles pricking his skin contribute to bleeding him white.”

https://www.jpost.com/Diaspora/Antisemitism/Italian-artist-accused-of-antisemitism-for-new-painting-of-blood-libel-622578
27 Mar 2020
An Italian artist renowned for his baroque-style paintings filled with Christian imagery was met with controversy after unveiling his latest painting of the martyrdom of St. Simon of Trento, which is a depiction of Jews ritualistically murdering a Christian child. Painter Giovanni Gasparo uploaded a picture of his canvas to his Facebook page on Tuesday titled Martirio di San Simonino da Trento (The Martyrdom of St. Simon of Trento). The painting is very detailed, showing a group of hook-nosed Jews with peyot and yellow, uneven teeth strangling the child and draining his blood. Some of the Jews are also shown wearing kippot and shtreimels, with one in the center wearing a tallit over his head and shoulders. In addition, the child is shown with its arms outstretched, reminiscent of Jesus Christ on the cross as the Jews look on with apparent sadistic joy. The event depicted in the painting has some historical basis. A two-year-old child in the city of Trento named Simon went missing in March 1475. Historical accounts are divided on where exactly the body was found, but a prevailing rumor at the time was that it was found in the cellar of a Jewish man named Samuel.

The Professor Toaff Controversy
MKs demand the author of blood libel book be prosecuted
http://www.haaretz.com/hasen/spages/830711.html
26 Feb 2007
MKs on Monday demanded that the state examine ways in which it could prosecute Professor Ariel Toaff, who wrote book "Pasque di Sangue" [Passovers of Blood], which discusses the possible facts behind 15th century European blood libels against Jews. In his book, Toaff discusses at length the possibility that Jews murdered Christian children to use their blood in religious rituals, and argues that confessions to such acts extracted under torture should not be dismissed. Toaff uses as an example the blood libel of Trent in 1475, and suggests that Jews did murder the young child, Simon, who is at the center of the affair.

Scholar Pulls Book Revisiting Blood Libel
http://forward.com/news/10085/blood-libel-scholar-pulls-book-pledges-funds-to-a/
16 Feb 2007
After unleashing a torrent of criticism both in his native Italy and around the globe, an Israeli professor has ordered his publisher to halt distribution of a new book that suggests a possible historical basis for the centuries-old charge that Jews murdered Christians and used their blood for ritual purposes. Ariel Toaff, a professor of medieval and Renaissance history at Israel’s Bar Ilan University, said in a February 14 statement that, while he stands by his research, he is recalling the book, “Pasque di Sangue” (“Bloody Passovers”), in order to reframe those sections of it that he feels have been misunderstood by readers and mischaracterized in the press.

Bar-Ilan professor who claimed Jews used Christian blood in Passover ceremonies defends his book: 'I will fight for my truth, even if I am crucified'
http://www.haaretz.com/hasen/pages/ShArt.jhtml?itemNo=824537&contrassID=2&subContrassID=1&sbSubContrassID=0
12 Feb 2007
In an interview with Haaretz from Rome, Professor Ariel Toaff said he stood behind the contention of his book, "Pasque di Sangue," just published in Italy, that there is a factual basis for some of the medieval blood libels against the Jews. However, he said he was sorry his arguments had been twisted. Toaff said he reached his conclusions after coming across testimony from the trial for the murder of a Christian child, Simon of Trento, in 1475, which in the past was believed to have been falsified. "I found there were statements and parts of the testimony that were not part of the Christian culture of the judges, and they could not have been invented or added by them. They were components appearing in prayers known from the [Jewish] prayer book.

Professor outrages Jews with book claim
http://www.telegraph.co.uk/news/main.jhtml?xml=/news/2007/02/08/wjews08.xml
09 Feb 2007
A Jewish academic has shocked Italy by claiming Jews murdered Christians for their blood in the Middle Ages so it could be used in rituals. The details were revealed in the Italian newspaper, the Corriere della Sera, which published extracts of the book, Easter of Blood by Professor Ariel Toaff. The book describes the mutilation and crucifixion of a two-year-old boy to recreate Christ’s execution at Pesach, the Jewish Easter. The festival marks the fleeing of the Jews from Egypt and Prof Toaff says Christian blood was used for "magic and therapeutic practices". In some cases the blood was mixed with dough to make azzimo, unleavened bread, eaten at Pesach. He says the acts took place in around the city of Trento in modern northern Italy, between the 11th and 14th centuries. 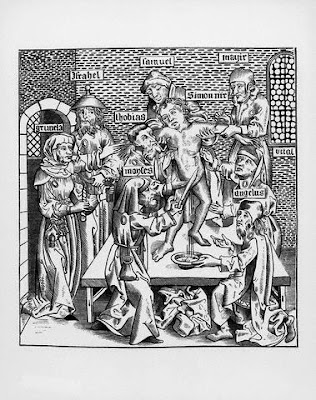 KR Skaggs
ChemE/MBA. Worked for Exxon as a Petroleum Engineer, Wells Fargo as a Business Analyst, Applied Materials as a Project Manager, Pacific Gas Electric as an Analyst, and was VP of a cofounded project finance advisory firm. The Form of Money has been a personal inquiry over 25+ years, leading to many paths of discovery, a historical and present journey.

The Form of Money 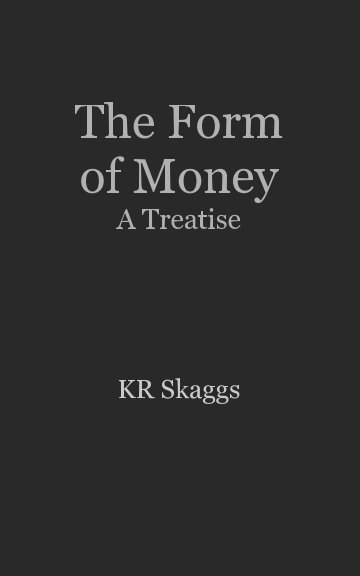 The Form of Money